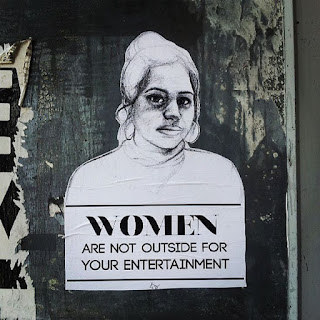 Saturday was a weird day for me.

I was supposed to wake up early and hit the gym so I could get in my three miles for training. Instead, I managed to oversleep by TWO whole hours. Lately I've been having the hardest time waking up. It doesn't matter if I've been out for four hours or ten. It's a struggle.

But I went about my business and got ready for work. I wore my current favorite dress, a recent arrival at the store. I was feeling pretty cute, if I do say so myself. I felt like Elle Woods. 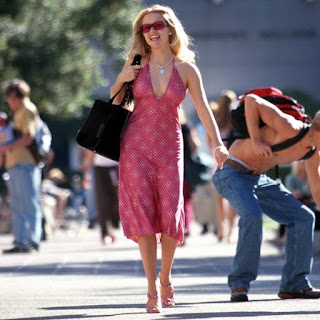 During my shift I had my fair share of weird/problematic customers, like the woman who handed me a receipt then said, "Oh whoops, that has blood on it." Like, real human blood you guys! A concerning amount of blood! I refused to complete the return. (Just kidding. I carried on as usual, just highly grossed out.) When I finally got off at 8, I hopped the L train to the gym. And when I got to Planet Fitness... it was closed. Why a gym would choose to be open 24/7 during the week and close at 7 on weekends, I don't understand, but there was nothing I could do. After sending a few half irritated, half joking snapchats, I started to get back on the train. But then I thought, Might as well walk the mile home since you obviously won't be getting in your run. So I put my head phones back in and began my walk.

I was scrolling through my playlists, trying to make a decision, ducking through the other people on the sidewalk. As went past a group of guys outside of a pizza place, one of them took a few steps after me before yelling

"You'll be somebody's baby mama when I kidnap you!"

His words made my blood run cold. I broke out in a sweat. I forced myself to keep walking as if he hadn't said anything, as if I couldn't hear him and his friends laughing behind me. I called a friend and had her stay on the line with me until I got home okay.

Unfortunately, as a young woman living in New York City, street harassment is a fairly constant part of my life. I'm lucky; I walk from my apartment to the train, from the train to work, and reverse, but other than that I don't spend a lot of time on the street. But of course, there was the time a couple weeks ago when Jessie and I were walking home and a group of guys began to bark at us.  Over Memorial Day Weekend my train wasn't running, forcing me to walk thirty minutes home from the J at 1 in the morning. A group of guys began to follow me. I kept telling myself it was nothing, that they just happened to be going the same way, but every time I sped up, they sped up, and I wasn't exactly in a position where I could take a chance that they didn't have anything nefarious in mind. At one point, right before I got to a street corner, the lights turned, and I was forced to quickly weigh my options: stay on this corner and be a sitting duck or cross the street and hope I don't get hit by a car. In the end, I felt like I was safer running into oncoming traffic. But of course, let's not forget the time I was sitting on the A train and a guy got right in front of me, shoved his hand into his sweatpants, and started masturbating in my face, forcing me to get up and change seats.

I can't even express what it feels like when street harassment happens. You're minding your own business, just trying to get where you need to be and suddenly some guy is there to remind you that You Are Not Safe. That if he wanted to, he could hurt you, or even kill you. Can you fathom what that is like? If you're a guy, you probably can't. You can try to put yourself in our shoes but you will never fully understand. Because overall, street harassment is still looked on as a joke. It's the cute girl getting whistled at by construction workers. It's a compliment. It's locker room talk. It's nothing.

And you know what? That guy probably wasn't serious about kidnapping me, I realize that. But what if he was? And let's just be clear, it had nothing to do with what I was wearing. Because street harassment is not a compliment, it's a verbal attack. It's an assault that flings itself from a man's lips and sinks it's razor sharp barbs into you, deflating what little sense of security you have afforded yourself. In just nine words, some asshole I don't even know was able to take me from this... 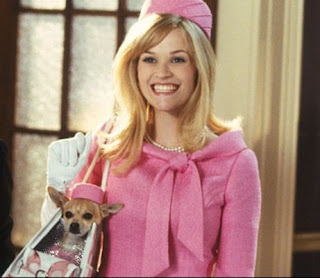 (If you would like more information about street harassment, how it negatively impacts us on both an individual and cultural level, and what we can do to bring a stop to it, I urge you to visit the Hollaback website, a global movement to end harassment powered by a network of grassroots activists. )

Popular posts from this blog

March 10, 2013
So yesterday was a fun day! My cousin Nicklas got married to a wonderful girl named Sarah. I hadn't been to a wedding since his sister Keitha got married in 2006, and I didn't remember much, so all of my nuptial related knowledge came from the wedding scene in The Sound of Music (which I was in this summer). The entire family really enjoyed themselves.
And furthermore, this was my first time to get to go out with all the single ladies for the bouquet toss, and lo and behold...
I sent this picture to Adrian. He's skiing so he hasn't received it yet. ;)

Anywho. The purpose of today's post is regarding the myth that theatre is a nice, safe past time. Wrong! Theatre is an art that imitates life, and that art sometimes turns a little painful. It's something that happens all the way from children's theatre to Broadway and West End. Afterall, Idina Menzel was absent from her closing weekend in 'Wicked' due to a cracked rib she sustained after an accident …
Post a Comment
Read more

We're moving quickly into spring (even if NYC weather fails to acknowledge it) and man do I have some great news to share!

First, I posted last time about how due to cut hours I had taken on the second job at Blue Balloons. It's not something I had necessarily been super excited about; it meant having 0 days off and being even more exhausted than normal. But I was willing to hustle if that's what needed to happen. But then my manager approached me about moving into a management position at Loft. I had been a Sales Lead at my store in Texas and we had spoken several times during my time at the Flatiron store about moving back up, but there had never been a position open. But now, due to a series of moves within the company, one was! I gleefully told her I was still interested and she sat up an interview with our District Manager.

And I am now, officially, the new part-time Sales Lead at Loft in Flatiron! I am so excited for this new opportunity. Being a SL pu…
1 comment
Read more


As I mentioned in my last post, we got a new apartment! Now, some people hate moving. For them, it brings back feelings of sadness and leaving behind friends and family, but for me that's not the case. I've moved several times in my life. We relocated several times while I was growing up and while I was usually a little bummed about not seeing my friends anymore, the excitement at the prospect of the new, the unknown, almost always outweighed it. And when I moved into the dorms in August 2013, I couldn't have been more ecstatic. I was finally in college! I had literally been waiting my entire life for this very moment! And I was so lucky. My roommate, Emily, who I had been randomly assigned, ended up being a wonderful human being who I still consider a friend even though we're in different states. When she left WT, I lived with my soulmate, Maddie Todd, for a brief but amazing semester. Then I was finally relinquished from the dorms and Leilani and I move…
Post a Comment
Read more

Jordon
Hello. My name is Jordon! I am living in New York City attending the Stella Adler School of Acting. I hope to use this blog to chronicle my journey of continuing my training and becoming a professional, working actress.